So much love for the horror first person shooter by Monolith

Monolith's Blood is more than just a video game. Compared to today's first person shooters Blood offers an unique and haunting experience from the very first beginning. Therefore I would like to narrate how this game feels rather than to describe its technical aspects.

Let the blood bath begin... may be the ultimate statement when you wake up in your own grave in the first game level called Cradle to grave.

You – Caleb – are an old fashioned gunman from the early 20th century seeking revenge against your former master Tchernobog who betrayed you in your past life. And no: that name has nothing to do with the doomed Chernobyl. The name refers to a Slavic deity from the 12th century, which can be translated as “black god”. If you are interested in getting deeper into this topic you may study the Chronica Slavorum written by the German priest Helmold von Bosau in 1168-1169.

In the story of the game Tchernobog formed a cult called The Cabal. You were once a devoted member of that cult until you died, killed by the hand of your master. Now you get the chance to search and destroy that bad guy forever – and that is your objective.

The bizarreness of Blood catches you immediately as you approach your first enemy with nothing but a pitchfork. The spell of Blood begins. From the moment you start fighting with a Zombie nearby the graveyard there is no way back to daylight anymore. You can be dead sure: Blood is a dark, gory horror themed game.

The game is packed with lots of references to books and films. You’ll find mentions of films like Evil Dead, Return of the Living Dead, The Shining, The Wizard of Oz or even an analogy to the Necronomicon, the famous book written by H.P. Lovecraft. Some textures of the video game maps illustrate The Three Graces by Raffael and the cultists look very similar to the robed figures in the Spanish movie Tombs of the Blind Dead.

But there’s no reason to think Blood is missing a good sense of humor. Our protagonist speaks funny quotes of many pop songs from different eras like for example “I did it my way...” by Frank Sinatra or “If you want my body and you think I’m sexy...” by Rod Stewart.

Despite all you may ask what makes it so unique in Blood? Game competitors of that time like Doom or Duke Nukem 3D were also looking great and had similar game engines. But the secret of Blood can be explained in only one word: Atmosphere!

I hardly played another video game that cares so much on the sense of place and involves the player into its world that way. As the story goes on you will fight your way through an abandoned train station, a scary circus, a lumber mill, a house of horrors, a spooky cathedral and much more. All game levels are beautiful to explore and are made of fluid maps. The game takes place in 1928 but its style uses architectural elements of the Victorian and Edwardian period.

The weapons just fit perfectly to the setting. Starting with the pitchfork you will shoot your enemies with flare guns, burning them down while they running to you, blow them up with remote mines or simply throw dynamite sticks on them. My favorite weapon still is the vodoo doll, which you can use to harm enemies while stitching into the doll. What a gorgeous idea.

All levels of Blood are scored with a minimalistic MIDI soundtrack, which Daniel Bernstein specially created for the video game. The music has a significant effect on the mood and nerve-racking feelings of the gamer.

Even more frightening is the language developed by Bernstein and spoken by the cultists. It is based on Latin, French and Sanskrit. It combines words and verbs and sounds like an ancient language. Here are some examples with their meanings: crudux cruo (Fresh blood), pestis cruento (Blessed), bhuudesco invisuu (To become hate).

You will hear these horror phrases in mostly all episodes of Blood. And believe me: once you will hear the robed priests shout something like “marana malax!” it will scare the hell out of you! And you will likely never forget these words.

And if you are able to obtain the soundtrack of Blood, just put it on your iPod, Smartphone or whatever. Push play, close your eyes and let yourself dive into the fictional and fantastical realm of Blood. You will be delighted.

Beside the great single player mode, Blood delivers an astonishing multiplayer experience. I believe it is the multiplayer network game I have played the most with my mate in the 90s. Even more than Doom. We spent months hunting ourselves down in the maps of the game. Always commented by “The Voice” which is the real voice of Jason Hall, the founder of Monolith. What a blessing.

To sum it up - as you may have noticed it is hard for me to criticize Blood. It convinced me from day one. And it still does today. In my opinion the only comparable game might be Half-Life 2, which has the similar ability to beam me up to other place and time. But if I had to choose between these two games, I would always pick Blood.

It is still more than a game to me. 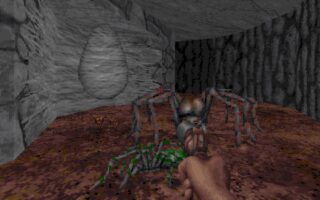