Archer Maclean's Pool (also known as Billard Americain) is a 3D billard game created by Archer Maclean for the Amiga in 1992 and published by Virgin Games. Versions for MS-DOS and Atari ST were released too.

For the ones that don't remember, Archer Maclean is the developer of the legendary International Karate + (also known as IK+).

The title is a sophisticated pool simulation that uses the same engine as Jimmy White's Whirlwind Snooker, also developed by Archer Maclean, but with some improvements and optimizations, giving us even more realistic physics and better framerate. The table is also smaller (pool and Snooker are two different games), so the game is generally a bit faster and easier to play. This is why many people prefer this to Snooker because it requires less strategy. At the same time, the simulation is detailed enough to allow very complex moves, something that will make any pool lover happy. It's possible to find complex solutions, something you could not do on Arcade Pool, for example. 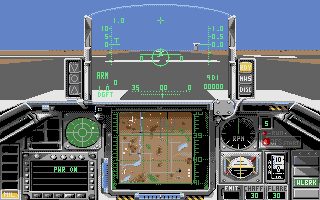 Falcon: The F-16 Fighter Simulation is a flight-sim developed by Sphere and published by Spectrum Holobyte initially for MS-DOS and Macintosh in 1987. Two years later, it was ported to Amiga and Atari ST.

In this game, you can pilot the famous F-16 jet in different missions, including air-to-air and air-ground battles. Many aspects of the plane are reproduced faithfully, including the electronic displays and radars. Even the enemy movements were programmed with artificial intelligence to simulate the realistic behavior of pilots. The result was incredibly advanced, considering that the game was released in 1987. 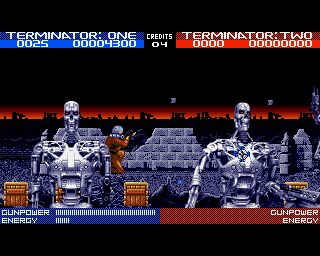 Terminator 2: Judgment Day, renamed T2: The Arcade Game for the home conversions, is a coin-op created by Midway and later ported to several home computers and consoles. The Amiga and Genesis/Mega Driver versions were curated by Probe and released in 1993.

This shooter, made of seven different levels, belongs to the rail-shooter genre, games where you just move your crosshair to shoot approaching enemies. Amiga users will recognize the similarities with another popular shooter called Operation Wolf, but in this case, you have all the movie elements that make the experience more rewarding.

The Master of Magic

The Master of Magic is a top-down action-adventure/RPG, published by Mastertronic's Added Dimension originally for the Commodore 64 in 1985.

The game was developed by Richard Darling, while the legendary composer Rob Hubbard created the soundtrack. Even if the title is the same, this game has nothing to do with the famous 1994 strategy game. This title by Mastertronic is less popular than the masterpiece created by Microprose almost ten years later, but this doesn't mean you should not play it. The Master of Magic might look simple, but it's delightful.

Knightmare, known in Japanese as Majyo Densetsu, is a fantasy vertical shoot-em-up created by Konami for MSX computers in 1986.

In this game, you are Popolon, and your task is to save Aphrodite from the Prince of Darkness. To do that, you must travel across eight levels full of enemies and kill the terrible end-of-level bosses.

What makes this extremely enjoyable game different from the plethora of shooters released in the 80s is that the gameplay is exactly like a classic vertical scrolling shoot-em-up, with starships firing lasers and collecting power-ups, but ported to a fantasy universe. So, instead of a starship, you have a knight walking and firing arrows and swords (or double-swords, if you get the proper power-up). Enemies are classic Japanese fantasy monsters, like demons, ghosts, or evil knights. The bosses are not giant alien monsters but instead witches and devils.

Rescue on Fractalus! is a sci-fi combat game created by Lucasfilm Games (aka LucasArts) in 1985, initially for Atari 8-bit computers. Later it was ported to Amstrad CPC, Apple II, Commodore 64, ZX Spectrum, and other platforms.

Fractalus was one of the first two games (the other one is Ballblazer) created by the famous game studio founded by George Lucas as a spin-off of his main company. The designers of this game include David Fox and Gary Winnick, that would later work with Ron Gilbert on Maniac Mansion, Zak McKracken and the Alien Mindbenders, and other famous adventures.