Personal Nightmare is a horror game developed and published by Horror soft in 1989. 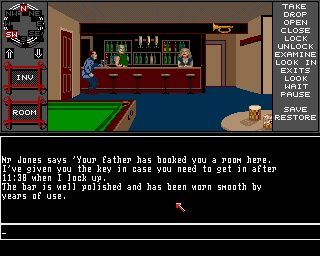 Personal Nightmare is a horror game developed and published by Horror soft in 1989. The title was released for the Amiga, Atari ST, and MS-DOS.

The game is the direct forerunner of two Elvira-based installments, which are Elvira: Mistress of the Dark and Elvira II: The Jaws of Cerberus.

Despite not having a specific plot, the game has a clear focus. At the very beginning, the player is given the premise that the devil attacked his neighborhood and began to possess its inhabitants. The objective is to eliminate all of them and confront the devil. On the other hand, the protagonist only has four days to achieve this feat.

The gameplay of the release is quite dynamic. It also features a lot of components that the user has to be aware of if he wants to survive the adventure. First of all, there is a day and night real-time system. The imposed limit of 4 days creates pressure on the player and traps him in a constant race against the clock. Furthermore, the game is based on writing and choosing correctly between various dialogues and solving puzzles. With a limited inventory and the constant obligation to make the right decisions, the experience does not fail to be overwhelming from its very mechanics.

With the advent of more powerful consoles like the Commodore, Horror Soft saw the possibility of exploiting the audiovisual part of its titles. Personal Nightmare was the first to receive these changes, so players were able to enjoy a 16-bit submission. This had a massive impact on the title's focus, where the already heavy atmosphere would increase significantly in the presence of its multimedia resources.

The game's palette is quite varied, but it can be noticed a certain predisposition to the combination of opaque colors with dull pastels. Similarly, the developers chose not to use black lines to draw the boundaries of the elements. Despite its simple colors, this gives fresh air to art in general, making it very peculiar compared to other titles. The most characteristic is the dichotomy of details in the overall imagery. A lot of attention was paid to the drawing, but it still feels that the characters intentionally lack very intricate detail. This is done to highlight the scares and entities that attack the player. Accustomed to simple textures and barely distinguishable faces, the gamer is shocked to see a monster in a close-up with luxurious detail on every part of its body.

As with the image, the sound also impacts the opposites. First, one gets used to the absolute silence of a title whose gameplay is devoid of music. Then, the sound effects start to become present at a very high volume. Thus, the user is frightened even by the squeal of a door. This feeling only gets worse when instead of a door or a bell, it's the laughter of the devil himself ringing as soon as the adventure begins.

With generally positive reviews, Personal Nightmare is an entry that will remain in the memories of many players. If you want to experience it and try out some of today's non-existent mechanics, an oppressive atmosphere, and a real challenge, this is your chance.

There is a 'god mode' in this game that enables you to walk through walls and makes you invincible. Also the if you open the test.exe in a hex editor it has some telling strings, such as 'English.Sheep-Shaggers from London'.