Carmageddon is a violent and destructive racing game developed by Stainless Software and published by SCi and Interplay in 1997 for DOS and Mac (ported to other platforms in later ... 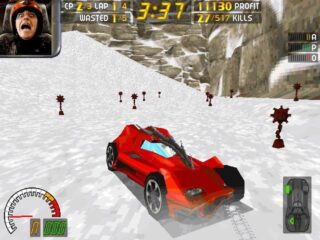 Carmageddon is a violent and destructive racing game developed by Stainless Software and published by SCi and Interplay in 1997 for DOS and Mac (ported to other platforms in later years).

Drawing inspiration from the movie Death Race 2000 (1975) you are put behind the wheel to cause as much carnage as possible.

In this no rules racing game take part in crazy levels in different settings like cities and snowy mountain tops. Starting at the bottom of the barrel in 99th place, you have to make your way up to the top spot. Winning races is important, but so is massive amounts of destruction. Races are timed, but you can gain more time by damaging your opponents or running over pedestrians. There are also a number of powerups scattered around the track that can boost time, speed, and other bizarre effects. Crossing the finish line first is not the only way to beat a race. It can also be done by wrecking all of your opponents or killing all of the people strolling around the levels. The more destruction the better as this earns you points toward upgrades and repairs. You can also gain new vehicles by wrecking certain rivals’ cars enough times. Another fun feature of this title is that you can leave the race track at any time and just do some exploring, you never know what craziness you’ll find.

Carmageddon, as you can imagine, was censored or banned in several countries. It still managed to sell about 2 million copies upon its release. It did so well it managed to spawn a series containing 2 more games. Carmageddon is not for those who are easily offended or put off by gore. With its ridiculously violent and gory gameplay, and easy control scheme, Carmageddon is just an entertaining thrill ride. Put the pedal to the metal and annihilate everything in your path! Have fun!