Dangerous Dave in the Haunted Mansion 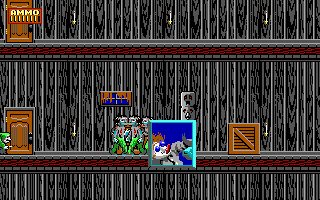 Dangerous Dave in the Haunted Mansion (a.k.a. Dangerous Dave 2) is the sequel to the original Dangerous Dave and was developed by Gamer’s Edge and id Software; and published by Softdisk Publishing in 1991 for DOS.

The game was created using the Shadow Knight’s engine which allowed for smoother character animations. This is the first in the franchise to feature an auto-loading weapon and the ability for Dave to aim in multiple angles.

This time around Dave is on a mission to rescue his brother from a haunted mansion. Dave has to fight his way through dangerous creatures in order to reach his brother. Dave can shoot 8 bullets from his shotgun before he has to reload and this takes time. He will stand completely still while reloading so be careful. Dave must also watch out for traps that are spread throughout the mansion. He can also collect diamonds and other items that are dropped by slain enemies. Should Dave collect enough points from killing enemies and collecting items, he can earn an extra life. Dave must also defeat 2 bosses, one at the midway point and one at the end. The game does not have a save feature beyond being able to start from the previous level should you lose all your lives.

Dangerous Dave 2 takes a classic platformer and adds shooting and strategy to it. The end result is something completely fun and unique. This was also the first game that the id crew programmed a shotgun into. DD2 is an action filled game with a touch of dark humor that can appeal to anyone.