Hocus Pocus is a fantasy platform action game developed by Moonlite Software and published by Apogee Software in 1994 for DOS. 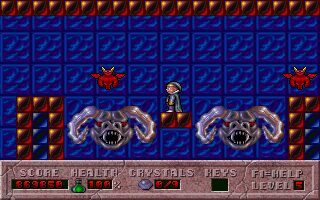 Hocus Pocus is a fantasy platform action game developed by Moonlite Software and published by Apogee Software in 1994 for DOS.

This game has nothing to do with the movie of the same title that was released in 1993. However, the game does have several references to J.R.R. Tolkien’s Lord of the Rings series.

You take the role of a young apprentice named Hocus who is trying to gain his Magician’s status. He dreams of earning a spot on the Council of Wizards. He also has aspirations to marry his best girl once he proves himself. He must go on a quest, of course, to recover magical crystals to impress the Wizard Chief and gain the favor of the other members of the Council. This quest is no walk in the park and Hocus will have to face off against a wide variety of deadly creatures to reach his goal. Hocus does have a spell to protect himself, he’s just an apprentice after all, but he can locate potions that give him power ups along the way.

Hocus Pocus offers a lot of variety in the amount of different enemies and changing environments. There are puzzles to solve and hidden secrets on each level. The game is easy to pick up as there is no complex control scheme to worry about. Hocus Pocus has some very mixed reviews, but in the end it’s a decent platforming game.