Jazz Jackrabbit 2 is a side-scrolling platformer produced by Epic Games (at that time under the name Epic MegaGames) and, after an accidental confirmation by Arjan Brussee in 1994,... 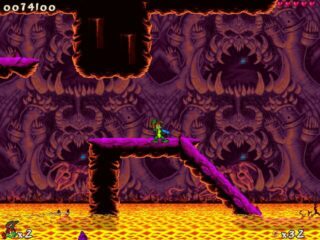 Jazz Jackrabbit 2 is a side-scrolling platformer produced by Epic Games (at that time under the name Epic MegaGames) and, after an accidental confirmation by Arjan Brussee in 1994, it was published in 1998 for Windows.

This is a sequel to Jazz Jackrabbit (1994). In this case, the protagonist must pursue Devan Shell, leader of a terrorist group made up of turtles and the main villain of the previous title, through time to recover the ring with which he plans to marry Eva, his romantic interest.

The gameplay resorts to the classic formula of the 2D titles, the player must move from the beginning to the end of the level, not without first facing several enemies and going through different traps that make this task harder. However, this installment doesn't need to be revolutionary in this matter because its merit is not in the destination but in the route.

First of all, not only are the controls very friendly, but the game is relatively easy compared to its contemporaries. Rather than a curiosity, this is a decision of the developers, who, based on excessive save points, accelerated gameplay and shooter elements, sought to make the experience as enjoyable and fluid as possible.

This feeling can also be felt in the more artistic part of the title. The music, which is a chimera between techno, psychedelia, and even family-friendly rhythms, motivates the player to move forward and shoot everything he sees.

The graphic design of the game is a masterpiece; in each section, there is a choice of two or three colors that are present throughout this phase. The endless selection of vivid colors engulfs the rabbit in this atmosphere. In any other release, this would have been a mistake or a method to take the gameplay out of the central axis. Still, with the frenetic and intense nature that it possesses, it creates a perfect balance of aesthetics and gameplay.

Although there were no significant changes from one game to another, the inclusion of a multiplayer mode for LAN or Internet sealed the affection of both fans of the saga and critics, which reviewed the installment with mostly positive reviews.

There are countless reasons to play Jazz Jackrabbit 2, whether you're a fan of the saga, in search of an excellent multiplayer, or even want to spend time shooting the first unfortunate living thing you come across, the truth is one: you have to try it.

Including Jazz Jackrabbit 2 with JJ2+ +