Jimmy White's 'Whirlwind' Snooker is a 3D snooker simulation developed by the famous programmer Archer MacLean, and published by Virgin Games in 1991 for the Commodore Amiga, Atari... 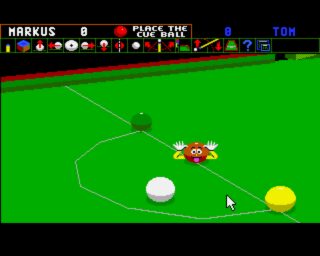 Jimmy White's 'Whirlwind' Snooker is a 3D snooker simulation developed by the famous programmer Archer MacLean, and published by Virgin Games in 1991 for the Commodore Amiga, Atari ST, and PC.

In my school days, I remember going to play pool on the way out was one of my favorite things. I still have it stuck in my memory that I tried a backhand shot where I would not only line up all the balls perfectly but would force my fellow competitors to shoot a superb trick shot to avoid scoring one of my balls. I prepared myself to shoot, I calculated everything to perfection... And I missed the cue ball. I forgot to tell you guys that I really suck at Pool, but I like to play it. And for those of you who have a good time like me, I will show you one of the most realistic pool simulators.

The game's name is Jimmy White's 'Whirlwind' Snooker and was created by Archer MacLean, a programmer responsible for the Dropzone, a title you definitely have to play if you haven't already.

Most of us played a pool game at some point, whether it was on a console, PC, or a Facebook mini-game when it was still relevant (good luck remembering that). One of the characteristics of these titles was its reductionism. Even though it had the same rules as Pool, it was simply hitting one ball with another, losing many factors of the real game. In Jimmy White's 'Whirlwind' Snooker, this does not happen. In fact, it is quite the opposite.

The main feature that differentiates this entry from all its peers has a name and is called the Trick Shot Editor. With this tool, players have a list of possible moves and how they can be resolved, among other options that add a particular complexity to the game. After this, the mechanics, physics, and game styles have a natural fluidity that makes it a faithful simulator to the real sport.

Another key to making the title feel different is that it looks different. This is achieved in the graphic part by implementing a camera in the first person to the cue ball, thus separating the traditional overhead camera. To achieve this, 3D technology is used, which in 1991 was very well seen, but today many of them aged very badly, although fortunately, this is not the case.

The sound usually brings a comical relief, where despite using realistic sounds when the balls collide, they are deliberately mixed with other very exaggerated ones. This is part of a comic atmosphere that is generated at times, where the computer will mock the player when he takes too long to make his shot or applaud him when he makes good plays, something that I personally feel I never deserve in this sport. Still, I do not complain about the positive reinforcement.

The titles' reviews were positive, where one of the highest points is the impressive realism (for the time) and its fidelity concerning its real counterpart. If you like Pool, whether you play very well or you play it as I do, Jimmy White's 'Whirlwind' Snooker has to be in your library, or in this case, in your bookmarks. Don't miss the opportunity, and start playing now!