Lorna is an action game based on the Spanish comic book character created by Alfonso Azpiri. 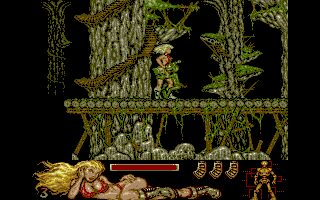 Lorna is an action game based on the Spanish comic book character created by Alfonso Azpiri. The game was developed by Topo Soft and released in 1990 for the Amiga, Atari ST, MS-DOS, MSX, Amstrad CPC, and ZX Spectrum.

The gameplay is the typical side-scrolling platformer/beat-em-up, somehow resembling Lionheart, whose jungle/sci-fi graphics are also similar. I will avoid easy comments on the sexy heroine, which was, alone, enough for many people to try this title. But the truth is the development team did a great job with all the game art in general—perfect choice of colors and many details. The monsters and the backgrounds are great, especially the underground ones.

Unfortunately, the visuals are the best part of this game, which suffers from a very high difficulty level and serious design problem. But considering that the game is quite short and that you can use a trainer, you can play it to see the beautiful graphics.

In theory, the game is in Spanish, but you won't notice it because the text is almost non-existent.