Lupo Alberto: The VideoGame is a platformer based on the Italian comics Lupo Alberto (Alberto the Wolf), created by Digiteam and Idea Software in 1990 for Amiga and Commodore 64. 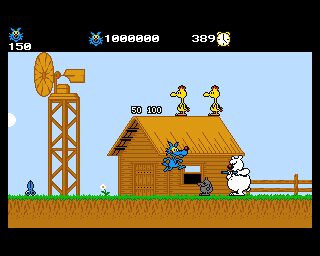 Lupo Alberto: The VideoGame is a platformer based on the Italian comics Lupo Alberto (Alberto the Wolf), created by Digiteam and Idea Software in 1990 for Amiga and Commodore 64. The Atari ST version was started but never completed.

In the comics, the blue wolf Alberto loves a hen called Marta, but the sheepdog Moses always tries to stop them.

The game supports two simultaneous players, and you can choose between Marta, the hen, and, of course, the wolf Lupo Alberto. They two characters have different skills: Marta, for example, jumps higher. The goal is to allow Marta and Lupo Alberto to be finally together... and alone. The original game included some comics strips, with the final scene missing. Only completing the levels, the players were able to see the missing piece on the screen.

This is a colorful and cute platformer, a little bit slow in terms of gameplay, and a bit too difficult, but pretty in line with the standards of the time.

Lupo Alberto was a massive hit in the '90s in Italy; if you know the comics, I have no doubt you will appreciate the game. If you don't, it's a chance to try something new.