Mario Teaches Typing is an educational video game developed and published by Interplay Productions in 1992. 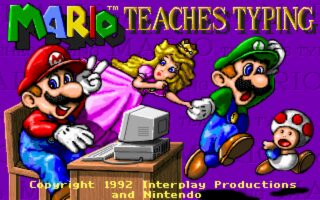 Mario Teaches Typing is an educational video game developed and published by Interplay Productions in 1992. The title was initially designed for the MS-DOS, but over time it was ported to the Tandy 1000 and personal computers with Windows or macOS. Five years later, it received a sequel called Mario Teaches Typing 2, which also had an excellent critical reception.

As the title says, the objective of this entry is based on both knowing where the keys are and improving typing speed. For this, the designers relied on several levels of the original Mario Bros to create similar scenarios. The difference is that the obstacles and enemies have a one-letter indicator, and to get around them, the player must press it before Mario collides with them. Also, on other levels, players must type texts or dialogues while an enemy is chasing them, which encourages them to improve their speed to win.

This entry has several levels of difficulty that go from basic speed to high speed of typing. To further encourage users, there is also the possibility of playing with Luigi, or Princess Peach, classic characters of the saga. Finally, all players can see their report cards and check their overall performance reflected in typing speed or percentage of successful letters, among other things.

The modeling of the characters differs from standard deliveries. The heroes are in 3D with a much wider zoom. The three levels of the game do not have a lot of detail, which allows them to concentrate more on the keys than on external factors that can distract the player. All the music comes from Super Mario World, and Mario's voice is embodied by Charles Martinet, which is heard at the beginning and end of each level.

Due to the lack of stages and the fact that the digital voice can become tedious over time, the game received mixed reviews. Regarding the more positive aspects, the scale of difficulty and the constant accompaniment in marking the player's progress and performance were highlighted.

Whether it is for the children to have their first encounter with this tool or for the adults to improve their skills, the efficient use of the keyboard is essential. With a combination of education, fun, and melancholy, Mario Teaches Typing is the perfect alternative for those who want to learn, improve, or teach.