Prisoner of Ice is an H.P. Lovecraft inspired graphic adventure game developed and published by Infogrames in 1995 for DOS and Mac. It is primarily based on the novel At the Mou... 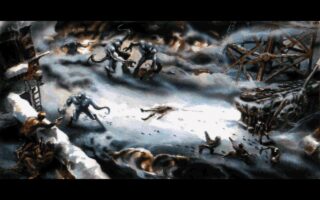 Prisoner of Ice is an H.P. Lovecraft inspired graphic adventure game developed and published by Infogrames in 1995 for DOS and Mac.

It is primarily based on the novel At the Mountains of Madness. It is actually the intended follow-up to the game Shadow of the Comet. Infogrames is the studio who created Alone in the Dark, also inspired by the works of H.P. Lovecraft.

The game is set just before the beginning of World War II and you play as a U.S. Intelligence officer. You are currently stationed on a submarine that is in the arctic to rescue a norwegian from a hidden german base. Since you can’t go to a secret base and not loot, you and your team have also taken 2 crates from the nazis. You soon find that this was a terrible idea as the stolen cargo contains a monster that eats the captain. Now trapped aboard the sub with this creature, you must find a way to survive. In true adventure game style you need to solve a few puzzles on your quest to survive. You need to be quick as some of the puzzles have a time limit. Should you take too long on certain puzzles, it’s game over.

Prisoner of Ice has a dark and eerie feeling to it and definitely gets you in the mood. The game was praised for its storyline and graphics, though critics complained about the voice acting. The game is a lot of fun, but it does not run particularly long. Though the length being a good thing or a bad thing is relative. This title is great for less experienced adventure gamers as they won’t get so stuck they can’t play it. However, it is also a good title for seasoned adventure gamers who need a break from their usual. Either way this game is definitely worth checking out.

Call of Cthulhu: Prisoner of Ice