Rygar: Legendary warrior is an arcade platform action game created by Tecmo in 1986 and ported to several platforms, including C64, ZX Spectrum, and Sega Master System. 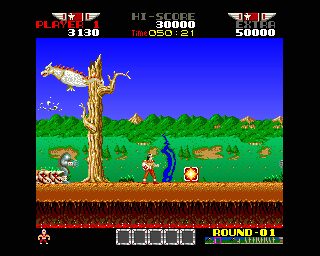 Rygar: Legendary warrior is an arcade platform action game created by Tecmo in 1986 and ported to several platforms, including C64, ZX Spectrum, and Sega Master System.

Born in the same year that monsters like Legend of Zelda and Castlevania were created, even if Rygar is not as remembered as the previous ones, it has nothing to envy them. The plot of the game consists of the classic formula of hero against villain. In this case, the protagonist is revived after millions of years only to wake up in a dystopian version of the earth, ruled by an evil emperor whom he must face after passing through hordes of enemies over 27 levels.

The Amiga version released last year was a real surprise. Despite Cowie's excellent record in creating Bomb Jack Beer Edition, after announcing at the end of 2018 that the game was going to meet the Amiga for the first time, it generated both expectation and distrust from the community. The developer set himself the difficult task of bringing this classic arcade into the new millennium as faithfully as possible, and, after devoting almost all his time exclusively to this task, he indeed succeeded.

Thanks to the Amiga AGA version, in addition to the excellent graphics that it already had, Rygar now has a clearer image, an improved interface, and changes in some attacks, and power-ups. Also, smaller details like animated lava or water effects were implemented, which far from feeling like a departure from the original product, perfectly complements the beautiful backgrounds that were already in the title.

As those who had the opportunity to try it out, claim that this action-adventure is not only almost perfect but in the eyes of many fans, it surpassed the original.