Superhero League of Hoboken is an adventure role-playing game created by Steve Meretzky (Spellcasting series) and published by Legend Entertainment in 1994 for DOS. 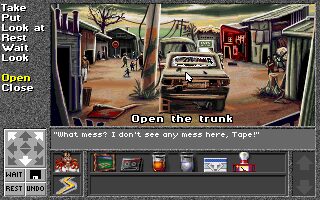 Superhero League of Hoboken is an adventure role-playing game created by Steve Meretzky (Spellcasting series) and published by Legend Entertainment in 1994 for DOS. This game is an amalgam of different play styles and genres that is a match made in heaven.

In this nutty post-apocalyptic romp you take the role of Crimson Tape on his quest to build a superhero guild and stop evil. CT starts out with a merry band of quirky heroes each with their own unique and often ridiculous powers. Following orders given to them by their ‘commissioner’, they go out into the world and save humanity. Once given a mission, CT and crew can traverse a top-down map and battle enemies that spawn randomly, and generally explore. This will also lead them to areas that are important to the actual mission. Once reaching a mission area, the gameplay switches to adventure mode and the heroes can chat with the locals and use items to solve puzzles. Players can switch back and forth from adventure to RPG whenever they want to, rather than being forced to finish a certain section first. Sublimely written and superbly funny, this game has it all. Get out there hero, Hoboken needs you!