Ugh! is an arcade flight game that is developed by Egosoft in 1992 originally for the Amiga. 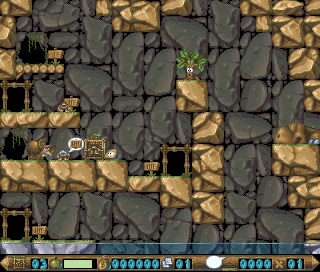 Ugh! is an arcade flight game that is developed by Egosoft in 1992 originally for the Amiga. The game was published by Play Byte and it was released also on MS-DOS and Commodore 64.

It's considered a clone of the famous Space Taxi, which was released in 1984 by Muse Software for the Commodore 64.

The game is pretty simple, you have a woman that is set to be your beloved future mate. The caveman is on a mission to collect some diamonds that are earned by transporting passengers on his stone-age, muscle-powered, helicopter. The game hilariously has 69 levels, which the player must endure through. Each one follows a pretty basic format, the player must carry a passenger by peddling along in his helicopter. To stop his romantic ventures are various obstacles and enemies such as prehistoric animals and natural barriers. You are armed with stones, which you can use to clobber the annoying pests that get in your way while snacking on a fruit that you knocked off a tree. Progress can be saved through the use of level codes that are made up of some pretty amusing phrases ("thecatsatonthemat").

If the game seems too easy, you can switch to the hard mode.

Ugh! is definitely best when its played using the 2 player mode. The commodore 64 version of the game features a hotseat mode where the two players can compete with one another to see who can finish it first. In contrast, the MS-DOS and Amiga versions consist of a cooperative simultaneous two-player mode. The addition of a second player does amp up the game's playability.

Overall, the game is pretty fun to pick up for a short while. The neat little graphics, along with hilarious game playstyle and theme, can keep one entertained for a bit. If you play 2, it's much more fun.