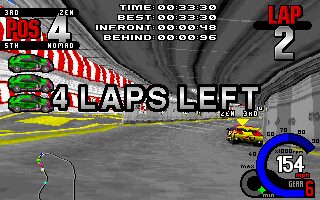 Like most racing games, the point is to reach that finish line first. The only things between you and the checkered flag are the crazy tracks and the opposing racers. Rather than racing alone, there are racing teams made up of 2 drivers. You can achieve victory by any means necessary. You can smash and crash into your opponents' cars to cause damage, as well as the occasional death. That's why Fatal Racing is often described as a mix between 4D Sports Driving and Destruction Derby.

You can also cause yourself damage as track stunts can be either nailed or failed. Vehicle damage can be repaired in pit stops, but don't make the mistake of thinking you're safely pitted.

The game features eight different vehicles and twice as many race tracks. Each track has its setup of dangerous loops, twists, and jumps to navigate. There is also a multiplayer feature to let you play with friends. So yes, it's like a more violent Mario Kart. I'm sure it probably ruined a couple of friendships in its day.

Whiplash is an excellent place to start if you like fast-paced racing and playing a little dirty.