Wipeout is a racing game developed and published by Psygnosis for Playstation and PC in 1995 and for Sega Saturn in 1996. 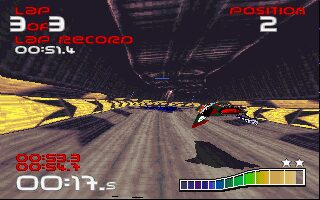 Wipeout is a racing game developed and published by Psygnosis for Playstation and PC in 1995 and for Sega Saturn in 1996.

The developers of the native Liverpool company, also known for publishing Shadow of the Beast, Barbarian, Lemmings and many other Amiga titles, created the game after 14 months of hard work and a very tight schedule. The result was a title that turned out to be the first in a series of racing games that only got better over time.

The story places the player in the year 2052, a medium-dystopian future where he must compete in the F3600 anti-gravity racing league. Before starting, you must choose from four teams that will compete on various futuristic tracks around the world.

The gameplay is very particular. As in many installments of this type, each runner with his own characteristics must collect weapons along the track to destroy his opponents and be the first to finish it. What really sets Wipeout apart from other racing games is that doing this is truly a challenge. Although the difficulty of the rest of the entries in this saga is high, this particular title comes close to the impossible to the point that for the player to claim victory, they must not only drive well but also have the track memorized.

The art of this game is absolutely beautiful. Clearly inspired by Blade Runner, the colorful and even at times, fluorescent maps reserve some opacity to remind the player that he is still in the year 2052 immersed in a post-industrial environment in decline. Its Techno music, composed by several artists such as The Chemical Brothers and New Order, is characterized by catchy sounds that merge with this sensation. This suggests that along with the gameplay, nothing in this game was left to chance or made to stand out at any particular point. In conclusion, everything is made to combine and blend perfectly to become part of the masterpiece that turned out to be Wipeout.

The critics were delighted with the release, despite complaining about the absurd difficulty, they praised the beautiful techno songs and the accelerated but controlled nature of the adventure. Furthermore, it is now considered a cult classic. After several sequels, a newer version of the game debuted on the Playstation 3 in 2008, with vastly positive reviews.

If you like original racing titles, you have little to think about. Whether it's to understand where this big saga comes from or to get into a long but compelling challenge, this is a must-have that will keep you distracted for a long time.