WWF WrestleMania is a wrestling game created by Twilight originally for the Amiga and published by Ocean in 1991. 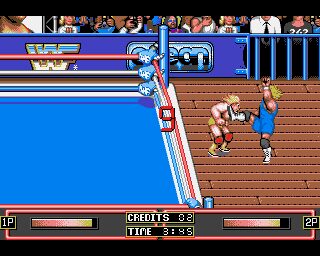 WWF WrestleMania is a wrestling game created by Twilight originally for the Amiga and published by Ocean in 1991.

The game, which was the first official WWF licensed title for home computers, was also ported to Amstrad CPC, Atari ST, Commodore 64, DOS, and ZX Spectrum.

Please don't consider it a wrestling sim; this is more an arcade. Anyway, you will have at your disposal several moves, not just punches, and kicks, but also the famous dropkicking, clotheslining, and a grapple maneuver.

You can control one of the famous fighters of the '90s: Hulk Hogan, the Ultimate Warrior, or the British Bulldog. Instead, the opponents are Mr. Perfect, The Warlord, "Million Dollar Man" Ted DiBiase, The Mountie, and Sgt. Slaughter. The fact that you can be Hulk Hogan should already be a good reason to play. If this is not enough, consider that you can also use the chair you will find outside the ring as a weapon.

As you might expect, the game supports two simultaneous players, which means you can challenge a friend. What else can you ask? Go and fight!