Consider Yourself a Hero: Contra is here!

Good news, everyone! We are officially popping our NES cherry! I am particularly excited because our first is one of my favorite games, Contra.

Funnily enough, the game came out the same year I was born (1987), so of course I played this one well after the fact. But that didn’t stop me from loving the crap out of it! Contra is one of the earliest shooters I can remember playing off-hand. I remember trying to run through it alone over and over. I had better luck when I played with my dad, who is still a huge gamer now. Playing it, I remember being surprised my character could swim. Well wade actually, as the water was about waist deep, if I remember right. That sticks out to me so much as many games had water as an instant death (I’m looking at you Frogger). Another thing that stuck out to me is the changing camera views, but I will get to that later. I’m not sure I can pinpoint exactly why I have always liked this series, I just always found it to be fun as hell. Even now I still have Contra Hard Corps for Sega Genesis and still play it from time to time. There are more than a dozen games in the Contra series and it is one of Konami’s most successful franchises.

Contra was developed by Konami and published by Erbe Software initially in 1987. It was released in arcades and on ZX Spectrum and Amstrad PC to start with. In this initial version of the game the setting is the Galuga Archipelago in the year 2633. A terrorist group is planning on taking over the world, with the help of some aliens, and the two contra soldiers, Bill Rizer and Lance Bean, are sent to stop them. It was later ported to other platforms, including NES in the following years. The NES version was released in 1988 and several changes were made to make it more compatible with NES hardware. A few notable changes are that the year it took place was changed to 1987 and the setting was changed to the Amazon. The two main characters also got badass code names, Mad Dog and Scorpion.

The NES version made a few other changes to the visuals and to some of the levels. A few of the levels were extended, while others were linked together into one full stage, and so on. Some of the levels also have a more linear layout than the arcade version, which was structured more like a maze. This was also one of the early NES titles to feature the Konami Code which could be used at the start (title) screen to gain 30 lives.

The game itself is done in a run-and-gun style and the enemy onslaught is all but endless. You can play alone or in tandem with another person and fight your way to the end. This 2-player feature was not the standard at that time, so it was a major selling point for the game. Your character can run, jump, and of course shoot. You start out with a standard gun, but finding power-ups along the way will change your weapon to other types like Rapid Fire and Laser. My favorite was the Spread Gun that let you fire several bullets at once that kind of fan out. Very useful for taking out multiple things. I also like how you can fire and jump at the same time, made all the more interesting by the kind of jump spin the characters do. The characters can also fire their weapons in 8 different directions, meaning no enemy is safe. As I mentioned before Contra had 2 different camera views. The majority of the game is played from a side view, scrolling as you move. However, there are base sections where the camera is directly behind your character as they fight their way forward, deeper into the base. The whole game has an almost feverish pace to it, just nonstop, reckless enemy slaying, it’s not meant to be played slowly. Though timing is still important as one shot can kill you. Being in the wrong place at the wrong time is deadly.

Contra’s graphics aren’t overly done and are the right kind of ‘simple’ to look good and make visibility perfect. This matters because you can see every enemy and projectile unobscured, making avoiding them much easier to do. The sound effects are perfect for an arcade setting and even playing from home you feel like you’re right there, throwing your quarters away. The music has a fast pace that suits the way Contra plays. It is not a particularly long game, but it’s a challenge. The length of the game does nothing to stop me from wanting to run right through it again and again. It’s just fast, fun and nostalgic for me. Perhaps I am slightly biased because I like it, but I totally recommend playing Contra. 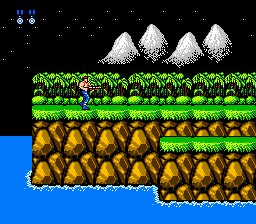