Backyard Baseball is a baseball game created by Humongous Entertainment and released for Windows and Macintosh in 1997. 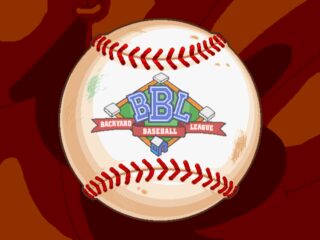 Backyard Baseball is a baseball game created by Humongous Entertainment and released for Windows and Macintosh in 1997.

It's the first of a long series of successful titles, the last one of which was released in 2015.

The idea of a videogame about kids playing baseball was developed by Nick Mirkovich, illustrator and animator. He presented the concept to the legendary Ron Gilbert (not only the creator of Maniac Mansion but also the founder of Humongous), and after a while, he approved. The design team was made of Mirkovich, Richard Moe (a programmer), and Mark Peyser (a graphic designer).

The game created by the trio was brilliant and totally unique. High-quality hand-drawn cartoon graphics, fluid animations, excellent gameplay, and, most importantly, a fantastic character design. The baseball players, 30 kids, were designed with their own look&feel and personality. Vaguely inspired to the Peanuts, they are also a great example of diversity: 15 boys, 15 girls, all in different sizes, colors, and races.

Somehow the kids remind me of movies such as The Bad News Bears (an amazing 1976 movie with Walter Matthau), and "The sandlot", except that in the game, there are many more girls :)

Anyway, the kids in Backyard Baseball are so cute it's impossible not to fall in love with them. For each one of them, composer Rhett Mathis created a specific theme song. This was probably one of the most memorable elements of this game.

As you could expect from a sports sim, there are also top players. In this case, the real star is a short kid called Pablo Sanchez. Even if he looks like the worst player, he is the greatest one, and everybody loved him. Believe it or not, Pablo Sanchez is one of the most beloved videogames characters ever created.

Curiously, Backyard Baseball was developed using the SCUMM game engine, the same used in many graphics adventure. It's a great example of the flexibility of the engine invented by Ron Gilbert. Apparently, creating a sports sim was totally possible. The basic mechanic is indeed quite simple. Still, the game supports different fields, tournaments, different stats for the players, and even a sort of Mario Kart-style power-ups.

Backyard Baseball is simply one of the most popular videogames ever created. So what are you waiting for? Download and play it!