Blood Omen: Legacy of Kain was developed by Silicon Knights and published by Crystal Dynamics. 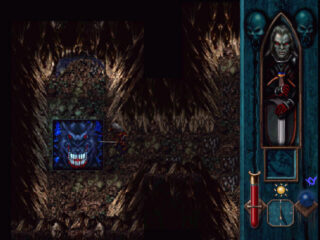 Blood Omen is the first title out of six in the Legacy of Kain series that spawned between 1996 and 2003. It is a successful 2D action-adventure with RPG elements, featuring very high quality of voice acting, story, and visuals for its time; it sold more than 2 million copies.

In Blood Omen: Legacy of Kain, you take control of the vampire Kain, a former nobleman who was brutally murdered by assassins. Kain travels the realm, seeking revenge by slaughtering and sucking blood from the corrupt oligarchy of sorcerers in the land of Nosgoth hoping to discover a cure for his vampirism.

The game received very positive reviews, and it still has a lot of fans today. There are several websites dedicated to the Nosgoth realm and the six games of the Legacy of Kain.

When this game was released I remember a reviewer calling it “Legend of Zelda from Hell”, but in a good sense. Its dark, mature atmosphere and intricate plot were the major draws of this game. Originally made for the Playstation, the PC port was stable and efficient and the graphics were nice for the time. The current equipment is reflected in the HUD, and Kain always has something to say about the items or the location --- in fact, he always has something to say and it is delightful written and Simon Templeman’s acting helps to deliver the experience so things never get dull. However, it could be argued that this game didn’t age so well. Compared to more modern titles with the same mechanics or even some from the same year, the controls can be a little clunky which makes it a little harder than it probably should be. I’d love to see a remaster or a remake of this title, and now the franchise belongs to Square Enix.

I noticed that with the MAC download that the cutscene was missing after Kain's death as a human. Is this due to the port from windows to MAC using wine? how can I get these cutscenes back?