The Manager is a variant of Bundesliga Manager Professional that was published by Kron Simulation Software and published by Software 2000 in 1991 for Amiga and DOS. 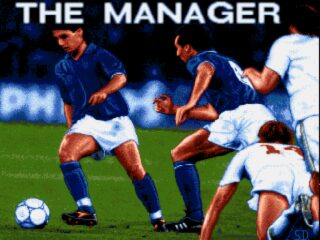 The Manager is a variant of Bundesliga Manager Professional that was published by Kron Simulation Software and published by Software 2000 in 1991 for Amiga and DOS.

This version of The Manager focuses on the English football (please know I mean Soccer) league rather than the German Bundesliga from Bundesliga Manager Professional. Other than the teams, nothing about the game has changed.

The Manager is a managerial football (soccer) simulation game. The game uses the real teams that played in the 1991-1992 league season. Your team starts out at the bottom of the third division and must work its way up. As the manager you control your team’s training and endorsements to fund your stadium. You will need some strategy and must figure out the best way to lead your team to victory in matches. As your stadium and team gains more prestige, you can get better endorsements and trade for better players. Should you manage your team properly, you can move all the way up to the Premier League.

The Manager was pretty successful, but not so much so as its German counterpart. Though both versions of the game did relatively well. It’s a good title for football fanatics who want to do more than just play the game. Take control of your favorite team and lead them to victory!