Championship Manager 97/98 is a football-management game developed by Sports Interactive and published by Eidos Interactive in October 1997 for PC. 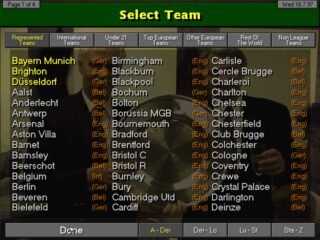 Championship Manager 97/98 is a football-management game developed by Sports Interactive and published by Eidos Interactive in October 1997 for PC.

The series was created by the Collyer brothers, that founded Sports Interactive in 1994.

The Championship manager saga puts the user to manage the different football clubs in which, far from the formula of playing the matches, they are in charge of handling the administrative affairs of the club. Among all the doors that this opens, there is one of analyzing the market and negotiating for real players, of course, always taking into account the money that the club has. The title even has several details that give it more realism and immersion, such as being able to see how comfortable each character feels about the club he plays for.

On the other hand, the game gives the player the possibility to take care of the tasks of the coach. Among all the options to do so, one can make changes in the professional staff, prepare each game according to the opponent, and even more particular details of the formation, such as specific movements of each character and the attitude they should take on the field. Besides, when the match starts, users can see all the events in accelerated time, text-only, so that they can control the performance of the team in a more efficient way.

This 97/98 edition uses the same engine of Championship Manager 2, but of course, it's updated with the new season. Even though the title is very similar to its predecessor, it presents specific changes that denote the seriousness of the project and its future plans. Firstly, an editor was added, so players could now modify the game at will. On the other hand, they tripled the number of leagues compared to the previous release. In this edition, it was increased to 9: Belgium, England, France, Germany, Holland, Italy, Portugal, Scotland, and Spain. These leagues were not only playable for users, but came with other features such as the ability to view the results or position tables in them.

For all the implementations in comparison to the previous release, the critics received very well this new entry in the world of Championship Manager, which was continued until 2011. Even though starting from 2005, the series continued without Sports Interactive, which instead created the new series Football Manager, still alive in 2020.

If you are, like me, one of those people who in the classic football games were more interested in strengthening the team and negotiating for the players than in playing the games itself, this is your opportunity. Besides, you can try out characters that played more than 20 years ago and have them as part of a "classic team," which is a plus for any football fan.

Hey - just downloaded the game on my PC, amazing. But would you know why it won't save a game when you come out and reload it at all? Other than that, pure nostalgia and honestly, some awesome games on here, taking me back to my youth! Thanks. :)

Hi, Just downloaded the game on my Mac which is awesome, thank you for that!!!!

However i cant seen to access the data editor....any ideas?

Would anyone know if there is a way to:
A. Access any other background images other than Bobby Robson or Nayim? I know the original had different images for most teams and pages.
B. Access the data editor
Thanks :)