Center Court 2 is a tennis game created for Amiga with an AGA chipset by Gernot Fritsche in 1996-1997 but released only in 2016. 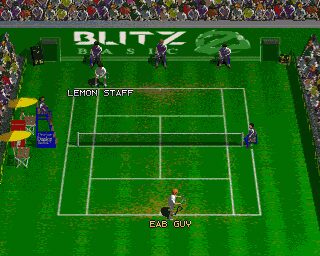 Center Court 2 is a tennis game created for Amiga with an AGA chipset by Gernot Fritsche in 1996-1997 but released only in 2016.

The game, written in Blitz BASIC, was supposed to be the sequel to Center Court (aka Blitz Tennis), but the Austrian coder stopped working on it when it was almost ready.

Many years later, in 2012, an English Amiga Board forum user called Python1 contacted Fritsche to ask if he had ever planned to develop a sequel to Center Court. Gernot answered: a sequel was already in development but never completed. This convinced Gernot to find his old Amiga and search for the game, but he discovered that the hard disk was severely damaged and the code was lost. Python1 didn't lose hope and searched for a solution. Gernot sent the HD to Switzerland, where Python1, working with a friend, was able to recover the data. He sent back the game code to the original author via email. At that point, there was only one thing that Gernot could do: finish the game. In 2016, Center Court 2 Tennis was finally completed and released, completely free. Great job!