Chronomaster is a graphic adventure developed by DreamForge and published by Capstone in 1995 for PC. 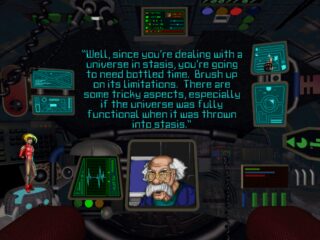 Chronomaster is a graphic adventure developed by DreamForge and published by Capstone in 1995 for PC.

The game was written by famous novelist Roger Zelazny, known for having won several times the Hugo and Nebula Awards with his science fiction novels. Zelazny was in charge of the game design, together with his friend Jane Lindskold. Unfortunately, the writer died while he was still working on the game, so he was not able to finish it. The game was completed without him, only his story was left intact.

The genius of Zelazny is immediately visible when the game starts. You discover that you are in a world where the creation of "pocket universes" is possible, and you are, in fact, one of the most renowned creators. You will be asked to investigate to solve a mystery: apparently, a theft is stealing time from pocket universes, and some of them are left "in stasis," with all the people inside them frozen in time. To travel inside them and discover what happened, you will be able to use "bottle time." Consuming the bottle will allow you to restart time long enough to enter these small universes (actually they are star systems with different planets, rather than universes) and investigate—a typical example of Zelazny's capacity of re-inventing the rules of physics.

Chronomaster is not a linear adventure, you have several quests, but not all of them are required to reach the final goal. Puzzles can be solved in different ways, which makes the title more engaging. Graphics is fantastic: it uses both bitmap graphics, for the starship cockpit, and 3d graphics, for the third-person view exploration mode. The cutscenes created with pre-rendered 3D graphics are beautiful. All the game is dubbed, the quality of the voices varies from poor to excellent, but there is also a hidden gem: one of the characters that our hero will meet is dubbed by Brent Spiner, the famous "Data" from Star Trek - The Next Generation. Dialogs sometimes are a bit slow, even boring, I wonder if things would have been different if Zelazny could have completed the game. If you add that, during the third-person view, the walking speed of the characters is not very fast, you understand why this game won't appeal to action-adventure lovers. But if you love good stories and you a fan of interactive fiction, you are going to love it.

Chronomaster wasn't a huge success, most probably because of bad marketing, not for the small problems mentioned above. In any case, this is a quality game, a title that should be not only remembered but also played today.

If you are a fan of the work of Zelazny, who had a strong influence on videogames (not only Nine Princes in Amber but also Planescape: Torment was inspired to his novels), you simply cannot miss it.