Companions of Xanth is an adventure game published in 1993 by Legend Entertainment. 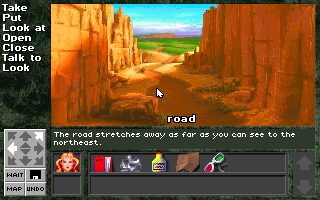 Companions of Xanth is an adventure game published in 1993 by Legend Entertainment.

Making a video game based on a book is really a risk. The title is not judged by its quality as a videogame only but also by its fidelity to the source material. Besides, even if these two things are met, there is always the fan's subjective view of the developers, which can cause a conflict that can ruin the first ones' experience. How could a game based on such a particular style as Piers Anthony's go with all the ingredients for disaster? Ladies and gentlemen, this is Companions of Xanth.

The title was developed and published by Legend Entertainment, a company that rotated between interactive fiction and adventure games. The game that came out only for MS-DOS had a great presence of Michael J. Lindner, who was also in charge of its design and programming besides being the main artist of the title.

The title begins with a bet between two demons, whose selfish motives force two strangers to meet in Xanth, but always with their ignorance and through false coincidences. Besides, they will travel with native companions of the place, forming an exploration team. Thus, the game begins with a young teenager entering and exploring Xanth, but from his computer. What can go wrong?

Companions of Xanth works just like any other adventure game, with lots of dialogue and puzzles. The gameplay is arguably the weakest part of the adventure. Their puzzles are easy and seem to be an excuse for the title to have some gameplay. As I said before, the game is based on a novel by Piers Anthony called Demons Don't Dream, and you can see that the idea was to do it justice. Apart from having good dialogues, the entry also has a quite corky style and humor based on puns and visual gags, giving enough identity to the adventure and contributing something more to a novel that, after all, is limited by its own medium.

Even though the colors are too intense and oversaturated, the adventure is pleasing to the eye. The composition maintains a certain harmony. The color palette was thought of as a whole and not a combination of random colors, as it usually happens in many graphic adventures. The music may sound somewhat similar, but it works very well since it applies very well to each environment in which it appears, and ultimately its catchy tones are well achieved.

In short, does Companions of Xanth work as a good video game? The answer is no, but it is still quite fun. Does it work as an adaptation of the novel? Absolutely. However, I don't think the game should be limited to fans of the source text; it's a fun experience for the casual gamer and a chance to start reading Piers.