EGATrek is one of the best remakes of the original Star Trek game developed on mainframes in the '70s. 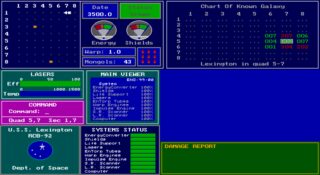 EGATrek is one of the best remakes of the original Star Trek game developed on mainframes in the '70s. Nels Anderson created EGATrek originally in 1988 for MS-DOS and released it as shareware, but continued working on it until 1994.

The author added graphics to the original game, which was based entirely on text. Unlike the original, EGATrek uses awesome hi-res 640x350 EGA 16-color graphics, hence the title. The display is designed to show all the useful information on the screen, like the galaxy map or the damage control view, things that, in the text-only version, needed to be activated with a specific command. Btw, in case you don't know the original gameplay, have a look at Rediscovering the 1978 text-only Super Star Trek Game.

But it's not just about visuals. Anderson added different types of enemies, planets where you can extract energy, the difference between warp and impulse engines, a dangerous weapon called death-ray, and more. The gameplay has also been enhanced because, in addition to simply killing enemies, you also receive distress calls from friendly starbases and have to go and protect them.

EGA Trek is a game that has been constantly improved and fine-tuned for 6 years, and everything works perfectly. The only real downside is that when it became too popular, Paramount asked the author to remove all references to Star Trek. So now your ship is called U.S.S. Lexington, Klingons are called "Mongols", Phasers are "Lasers", and so on. And of course, there is no trace of Spock, Sulu, Uhura, Scotty, and the others.

Apart from this, EGA Trek is a fantastic game. Not as complex as other space simulations like Star Control, but engaging and entertaining. For all the fans of the original game, a must. For the others, a nice surprise.