Available Platform: DOS - Alias: Heroes of Might and Magic II: The Succession Wars

Heroes of Might and Magic II: The Succession Wars is a tactical turn-based strategy game developed by New World Computing and published by The 3DO Company in 1996. 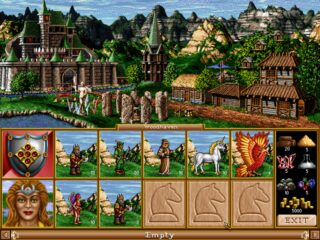 Heroes of Might and Magic II: The Succession Wars is a tactical turn-based strategy game developed by New World Computing and published by The 3DO Company in 1996. Although the title was initially intended for DOS, it also had its versions in Windows and Mac OS.

The person in charge of bringing this game to life was the American director, designer, and producer Jon Van Caneghem, who also founded the company. The game is the sequel to Heroes of Might and Magic and, despite being unrelated, it is set in the same universe as the Might and Magic saga.

The story of the title continues with the canonical ending of its predecessor, which culminated in Lord Morglin Ironfist's victory. After a prosperous reign followed by his death, the throne is disputed between his two sons, Roland and Archibald. After Roland's exile, planned by his brother, Archibald proclaims himself as the new king. Roland assembles a resistance to end with his empire and reach power.

The game features two campaigns, one led by the opposition (which is canonical) and the other by the royalty. The way the adventure progresses remains the same. The player must build a kingdom, continually improve it, obtain resources, and train soldiers and be prepared to stop an enemy attack. Likewise, the ultimate goal is still to find the opponent's castle and conquer it.

Similarly, this new installment changes many aspects from its predecessor. Firstly, throughout the campaign, different decisions are made by the player. This will slightly alter the history and lead to changes in the missions that are faced according to the chosen scenario. All of this brings a very high level of repetition in which the player is encouraged to start the same campaign again. Another addition to the franchise was the possibility of improving structures, which allows the appearance of several enhanced troops at the player's disposal. Besides the four existing classes of heroes, we now have the Necromancer and the Wizard. All six types of heroes also received improvements: they now have different secondary skills that distinguish them from each other more and more as the game progresses.

The graphic part of the adventure is one of its highlights. The colors are very vivid and stand out at all times. Each character is drawn in a very distinctive way. Their colors are designed so that they do not blend into an environment that is already striking. Although there are some arid areas with a predominance of brown, forests and lakes are an essential part of the game, giving a fundamental role to green and blue.

Paul Romero, Rob King, and Steve Baca were the composers of this entry. The work they did with the sound was excellent, giving the adventure epic music for the combats, intriguing for the exploration, and very well achieved sound effects. Finally, it is worth mentioning that the soundtrack has the inclusion of the opera as a novelty, taking it to a whole new level.

The reviews for Heroes of Might and Magic II were excellent. In a consensus of both fans and critics, this entry was the one that elevated the saga as a cult game. Also, it was agreed that in terms of gameplay, graphics, and music, it vastly surpassed its predecessor.

With seven installations and countless expansions and variations of each, Heroes of Might and Magic II is a title that no RPG fan should miss. If you want to get to know the game that paved the way for the franchise and at the same time is considered the best of them all, this is your chance! With a few clicks, you can start playing it!

The game literally locked me out of my own computer. If I log back in, it takes me straight to the main menu. I can’t access anything else but this game, and no matter what I do to exit the game, it brings me straight back in without me doing so.

Is there a way to SAVE a campaign mode and actually come back to it? I have not been able to figure that out.

Otherwise it has been downloaded well.

Thank you Roxana, we are glad you are happy. Remember you can show your appreciation with a small donation :)

Do you have any problems with some people getting the games they could not afford to pay for due to N number of reasons?? I thank the website administrator/s for their work and support on this website because thousands of people have been able to enjoy their favourite games because of this website which otherwise they could not have had the opportunity to play.

Guys, you rock!!!
Last year I've switched to Mac OS from Windows and my biggest (or rather only one) regret was not being able to enjoy my all times favorite Heroes of Might and Magic II. I spent a lot of time on the net trying to find an easy solution (aka no vm) and here it is!!!
Beautiful!!! I can not possibly describe how happy I am right now :)
Thank you so very much and keep up the good work! U've made my year, no exaggeration here!
Thanks!!!