Extreme Pinball is a pinball game, the successor to Epic Pinball, developed by Digital Extremes and published by Electronic Arts for DOS and PlayStation in 1995. 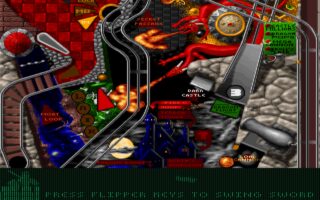 Extreme Pinball is a pinball game, the successor to Epic Pinball, developed by Digital Extremes and published by Electronic Arts for DOS and PlayStation in 1995.

The game is pretty simple as it is a pinball game; you have to hit the structures placed on the ball to gain points. The end goal is to get the highest score as possible, sealing your name in the glory list of contenders. Often your ball would whizz around and smack something to give you something extra like a few points or an extra shot. The game allows you to choose the number of balls you want per round, and players can even add a second player to compete with.

The exciting part of the game is the different tables involved, there are 4 tables in Extreme Pinball, each with its own theme and playstyle. Playing on one table is entirely different from playing on the other, as each table has its own set of secrets adding to the game's overall difficulty. It is pretty cool as well because the music changes according to the table and when the ball does something on the board like a neat sequence of hits! The ball even changes its form if you manage to hit something specific on the board because I swear one time my ball was whizzing around, and from what it looked like, it was a purple CD!

Although the graphics are in 2D and not 3D, they are still pretty nice, the ball looks realistic enough and whizzes around like how a real ball would. Compared to the predecessor, tables are longer and screen resolution of 320x400 is supported.

Although the title received negative reviews by most after its release, Extreme Pinball is one the fastest and most exciting games of its genre.