The Hitchhiker's Guide to the Galaxy

The Hitchhiker's Guide to the Galaxy is a text adventure by Infocom, based on the famous novel by Douglas Adams, a masterpiece of the comedy science fiction genre, written in 1979. 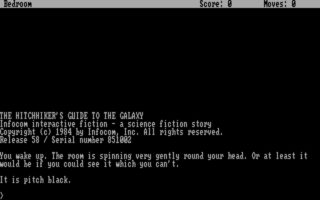 The Hitchhiker's Guide to the Galaxy is a text adventure by Infocom, based on the famous novel by Douglas Adams, a masterpiece of the comedy science fiction genre, written in 1979.

Infocom released the game at the end of 1984 for Apple II, Macintosh, PC, Atari 8-bit, Commodore 64. The Amiga, Atari ST, and other versions were published in the following years.

Infocom acquired the rights to work on the famous novel and was lucky enough to have the collaboration of Douglas Adams himself.

So the game designer Steve Meretzky worked together with the famous writer to create this interactive fiction that takes the book's best elements without following the plot closely. Initially, the game is very linear, but once Arthur Dent and Ford Prefect leave the Earth destroyed by the Vogons, this interactive fiction gives its best, with several non-linear subplots that will make adventure games lovers happy. Ok, some of the puzzles are not strictly following the "rules" of the classic adventures, but this is one of the reasons why this game is original and fun.

The truth is for the author of Planetfall, working with Douglas wasn't easy. The novelist wasn't respecting the deadlines, and if it were not for the Meretzky, the two would not have completed the title in time. Meretzky not only programmed the game but also wrote at least half of the text. However, having the other half written by Douglas Adams was an outstanding achievement (especially if you compare it with other cases where the author didn't collaborate at all (see James Clavell's Shogun, for example).

Said that The Hitchhiker's Guide to the Galaxy is not only one of the most famous Infocom titles, but it's probably the most popular and appreciated text adventure ever created. I only suggest reading the hints book and maybe downloading a walkthrough unless you are a real pro. Just one tip: turn on the light at the beginning. And remember: don't panic!

Download The Hitchhiker's Guide to the Galaxy - DOS Version

Download The Hitchhiker's Guide to the Galaxy - Amiga Version