Deadline is a text adventure published by Infocom in 1982. It was written by Marc Blank, one of the principal authors of Zork. The game was initially released for the Apple II, At... 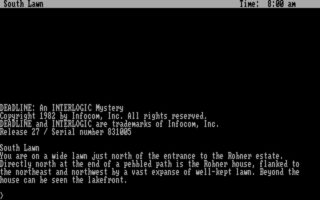 Deadline is a text adventure published by Infocom in 1982. It was written by Marc Blank, one of the principal authors of Zork. The game was initially released for the Apple II, Atari 8-bit, and TRS-80. Then later for the Commodore 64, MS-DOS, Macintosh, TI-99/4A, and several other platforms.

Blank wanted to try a different genre, after the three fantasy chapters of Zork. With Deadline, he tested his writing skills with a hardboiled/crime interactive fiction, and the result was excellent. The story is a classic. The rich and famous entrepreneur Marshall Robner was found dead in his library - the door closed from the inside. Apparently, it's an overdose of antidepressants, and the police are going to close the case as a suicide. But Robner's lawyer is not convinced, and he asks you, a famous detective, to investigate. You have exactly 8 hours to find the truth, exploring the house, and talking with the possible suspects.

What is new and exciting about the Deadline is that time actually passes (one minute per turn), and things "happen." The reality changes around you. You don't have the classic troll waiting for you at the bridge with his puzzle, for an infinite time, until you solve it. In Deadline, you must be in the right place at the right time. For example, if you are near a telephone at 9:07, you will hear it ringing, and you can type ANSWER TELEPHONE. Doing so, you will listen to Mrs. Robner - that picked up the line from another phone - talking with someone.

Similarly, if you are on the front door around 10 am, you can intercept the postman and read a very interesting letter. At this point, you should have understood that Deadline was (it still is) a very innovative game. In classic adventures, you could be stuck at some point for a long time because you cannot solve a puzzle. But as soon as you solve it, you will go ahead. Deadline instead is relatively short and small, and with no more than 50 different locations on the map, but often you will realize that you have just missed an important event, and you will have to restart. It's a game that must be played more than once, learning from your mistakes.

The other significant change introduced with Deadline is the importance of the NPCs. Each one of them has his own personality and emotional state, which can change depending on what you do. That's why dialogues are so critical. Just like in modern Bioware games, your choices in the conversations will make a difference. In fact, Deadline introduces for the first time parse commands such as ASK person ABOUT another person or TELL person ABOUT another-person. If you want, you can also try something like "MRS ROBNER, TELL ME ABOUT STEVEN." It works.

But now enough with the spoilers. You have enough clues to realize that Deadline is clearly a fantastic game. Even if you have never played an interactive fiction, this one is worth trying. My suggestion is to download a tutorial, but use it only when strictly necessary. Happy investigation!