Innocent Until Caught is a graphical sci-fi adventure developed by Divide By Zero and published by Psygnosis in 1993 for Amiga and MS-DOS. 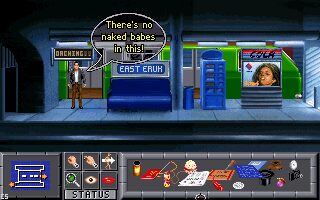 Innocent Until Caught is a graphical sci-fi adventure developed by Divide By Zero and published by Psygnosis in 1993 for Amiga and MS-DOS.

I don't know about you, but every time I started a new graphical adventure game without knowing anything about it, I felt like I was flipping a coin. According to my perception, a bad story or specific details were the difference in whether the game is a masterpiece or a total failure. Today we will revisit Innocent Until Caught, a title that, despite having felt in the first minutes of the game that the coin fell on the wrong side, I end up liking.

The game's story will take place in the year 2181 and begins when the thief Jack T. Ladd is captured by the IRDS, a kind of futuristic police that controls taxes. Besides having a fairly large debt for tax evasion, the inconvenience for the protagonist is the small detail that these agents can legally kill him if they want to. Thus, the protagonist is given 28 days to get the money or, according to the officer who threatened him, they are going to torture him, sell his vital organs, and THEN kill him (although I doubt that he is alive after they have sold his vital organs, but I am not the one to get into the officer's job either). Then, the title goes like any other graphic adventure. The player has a menu with several items and puzzles to solve. He can also interact with several NPCs that arise throughout the gameplay, having to choose between the classic dialogue options.

If I had to mark a negative point of the game, it is the reason why I entered this adventure with enough doubts, and that is the protagonist. The game tries to transmit a comical relief through the main character, a selfless George Clooney clone (I may not have proof, but I don't have any doubts) who spends all the game making jokes. I don't really have a problem with comic relief in the adventure, but Ladd is really unbearable. As many know, art is subjective, and in that sense, nothing beats humor and horror, but I didn't really get to connect with the main character. He makes jokes that would have been funny if I had been born thirty years earlier, his dialogue options are ridiculous, and only the right one makes sense. The worst thing is that he is consistently annoying throughout the gameplay.

On the other hand, the strongest point of the game is Ladd's story and the game in general. Do you think that what I just said is a contradiction? Well, I would think so too, but this game managed to interest me with its history and entertain me with its gameplay, even with a protagonist that I never supported, and that's something I respect very much.

The color palette is very varied. The developers used cold colors in-game periods where the technology predominated. Otherwise, there is a clear domination of green and constant use of shadows and degraded colors. The soundtrack is very well achieved, and the tones are quite captivating, but to tell the truth, they become old after a few hours and start to get a little annoying.

In summary, despite some inconsistencies in the story, a few bugs, and a protagonist who manages to be a jerk until literally the last minute of gameplay, this entry manages to succeed and be quite entertaining. It is definitely an easy recommendation for any fan of adventure games. Also, if for some reason you find this joker funny, this will become your favorite game.