Jonah Lomu Rugby is a rugby video game developed by Rage Software and published by Codemasters in 1997 for DOS, Sega Saturn, and Playstation. 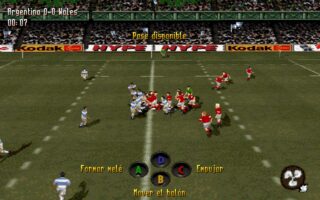 Jonah Lomu Rugby is a rugby video game developed by Rage Software and published by Codemasters in 1997 for DOS, Sega Saturn, and Playstation.

Jonah Lomu Rugby was the first rugby installment ever developed on PlayStation or Sega Saturn. The game is officially signed by the popular New Zealand rugby champion Jonah Tali Lomu.

The concept when creating the game was simple: to achieve a title faithful to the rules of rugby but that is accessible to any user, adept or not to this sport. Developers focused on all aspects of rugby, but without complicating the players with excessively specific or redundant information for the game.

Jonah Lomu Rugby has 32 national teams available for use, all having participated in the World Cup in South Africa in 1995. Among the game, modes are Friendly mode, Tournament, World Cup, Classic matches, and Territories Cup. Besides, the user can decide to enter these competitions in a single-player or with up to 3 other competitors.

The colors of the playfield are somewhat opaque so that users do not easily lose sight of the players. They are designed to look as close as possible to their real counterparts with characteristics such as hair, height, or skin tone. The commentators who lent their voices to the title were the famous Scottish narrator Bill McLaren and Bill Beaumont, the former capital of the English national team.

The game received very positive reviews, praising features such as the smooth gameplay, the climate changes, and the critical participation of the commentators. If you like Rugby games but feel overwhelmed by all the rules, this title will serve you as much as to fulfill that desire to open the door to more games. Best of all, you are just a few clicks away from playing it, so what are you waiting for?