Lenny's Music Toons is an educational musical adventure developed and published by Paramount Interactive for Windows3. 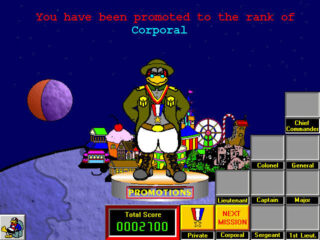 Lenny's Music Toons is an educational musical adventure developed and published by Paramount Interactive for Windows3.1 and released in 1993. Interacting with Lenny the Penguin and its home, you can play the several music themed mini games. This is the first Windows3.x game hosted on GamesNostalgia and it runs on the DOSBox emulator

Dad and I both used computers since Commodore 64 days. The biggest mistake ever made was going from ROM to RAM which Commodore 64 used ROM making it virtually hack proof. You could still get viruses if diskettes were infected but somebody hacking into it you just turned it off to bump them off.
Windows up to XP the reason you had to do the *Proper* shut down was because each little change you made HAD to be registered in the RAM so when you turn it off it has to hunt for every stupid thing you did kinda like a messy room.
In ROM everything is always in one place and can't be changed without being destroyed where RAM like Windows can be overwritten to the point important files needed to run the BIOS will fail if you really screw up.
Commodore 64 was basically screw proof and idiot proof.

What I mean is the game is a 8 bit Windows 3.1 game but works all the way up to 2K PRO and I think XP if your computer is 32 bit as it looks for Sound Blaster stuff and addresses were changed when motherboards went to 64 bit PCI-E
You need an old 32 bit computer with the older PCI motherboards that will take Sound Blaster 16.
Microsoft needs to make a way to emulate vintage Sound Blaster cards as Creative screwed themselves past the Live Audigy series since they went to China and the new 64 bit cards are pretty lame according to reviews.
We still have a SB Live card but no computer to run it in that's old enough to take it.