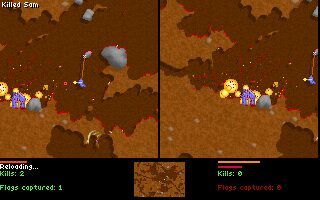 Liero is a real-time side-scrolling deathmatch game developed by Finnish programmer Joosa Riekkinen in 1998. The game has been described as a real-time version of Worms. This is the Liero "classic" version 1.33, released in 1999 for DOS. The author lost the source code, and due to the lack of backup, this was the last "classic" version released.