Lode Runner: The Legend Returns is the sequel/remake of the original Lode Runner created by Douglas E Smith. 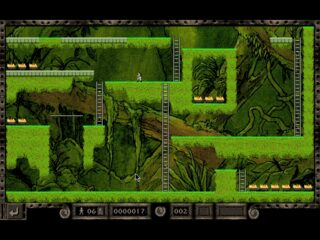 Lode Runner: The Legend Returns is the sequel/remake of the original Lode Runner created by Douglas E Smith. It was developed by Presage Software and published by Sierra On-Line in 1994 for DOS, Mac, and Windows 3.x. It was later ported to Playstation and Sega Saturn in 1996.

Lode Runner: The Legend Returns keeps very true to the gameplay of the original, but it enhances just about every aspect of it. Graphics, sound, music, as well as character animations. There is also the addition of a two-player mode.

The game plays as a single screen platformer where your goal is to climb up ladders and clear the levels of treasures in order to progress. Of course as you go the levels become harder and enemies begin to come after you. You do have a limited arsenal that includes bombs and booby traps. You also have the use of a drill, jackhammer, snare traps, and other goodies at your disposal. The levels are each set in different areas like Moss Caverns, Skeleton’s Keep, Inferno’s Playground, and many more. A level editor is available, like in the original game.

The Legend Returns was a successful revival of the original and even snapped up an award for Best Arcade Game the year of its release. Revisit this 90’s arcade puzzle classic. Where my puzzle fans at?

Any idea if it is possible to save the score on a Mac?