Panzer General is a top-down, turn-based, historical battle game developed and published by Strategic Simulations, Inc and released for DOS in 1994. 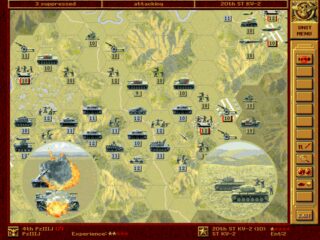 Panzer General is a top-down, turn-based, historical battle game developed and published by Strategic Simulations, Inc and released for DOS in 1994. It was one of the first games (if not the first) that gave you the ability to play for the Nazis, but succeed where Hitler failed.

In this strategic battle game you command land, air, and sea units to defeat the enemy forces. Choose between the Axis or Allied forces to take on a computer or human opponent or play campaign mode as the German Generalissimus and take down those Allied dogs. Go to war and take command of your troops through a point-and-click interface with an easy access menu. This game features “circled” battle animations, battle sounds, and marching and moving sounds (think Risk: The Game of Global Domination for Playstation, 1997). Even winning an award for Best Voice-Over Acting (Barry Link as commanding officer).

Taking inspiration from the Japanese strategy series Daisenryaku, and its non-traditional wargame design, Panzer General is one of the most important PC games of the 90’s. Garnering many awards including Wargame of the Year and Best Strategy Game. It is also on both the 150 Best Games of All Time list (Game Star) and the 50 Best Games of All Time list (PC Gamer). Panzer General earned its place in the hall of fame in 1997 of Computer Gaming World. This is a game changing, award winning strategy war game. If that doesn’t tell you need to play it, allow me. You need to play this game!