The Pawn is a text adventure created by Magnetic Scrolls initially for the Sinclair QL and published by Sinclair Research in 1985. 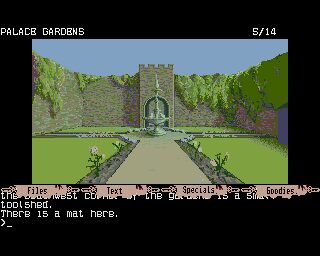 The Pawn is a text adventure created by Magnetic Scrolls initially for the Sinclair QL and published by Sinclair Research in 1985.

The game wasn't very successful and one year later Magnetic decided to add graphics and port the adventure to several home computers including Apple II, DOS, Macintosh, Commodore 64 and Atari ST. But the platform where the game really became a masterpiece was the Amiga. The graphics (mostly the same for all 16 bit versions), was very good and state-of-the-art for 1986. But the music on the Amiga port was simply amazing. The Pawn was the first game to features digitized instrument samples, using the revolutionary Paula chipset of the Commodore 16bit computer. This was something unprecedented for the 1986.

It was not only graphics and music anyway, the Pawn had a very interesting plot and a brilliant parser, making it a very good interactive fiction. The game got amazing reviews from the magazines and it won the Golden Joystick Award as game of the year and it was voted Best Adventure of the year by the readers of Crash Magazine.