Premier Manager is a football/soccer management sim published by Gremlin Graphics and developed by Realms of Fantasy in 1992 for the Amiga and Atari ST. 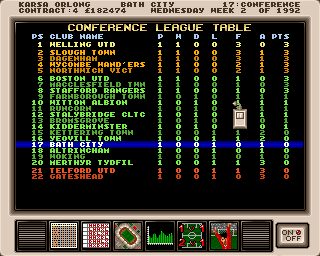 Premier Manager is a football/soccer management sim published by Gremlin Graphics and developed by Realms of Fantasy in 1992 for the Amiga and Atari ST. Later it was ported to Acorn Archimedes and MS-DOS.

This is the first title of a long series, but only the first 3 were created by Gremlin, since Premier Manager 97, the series is published by Dinamic Software.

The game designed by John Atkinson and Alex Kewin is pure managerial. Up to 4 players can join the challenge. Each of them will be the new coach of a team of the Conference League (it's not possible to start directly in the Premier League). Setting the right formations, picking the players, buying and selling players, and arranging the coaching schedules, will be your main activity. If you can build a strong team, you will eventually take your club to the Premier League, and maybe you can win some titles. The financial aspect is fundamental because the club must have money to invest. You can manage the sponsorship and ticket sales or ask for loans.

The game was highly appreciated, with 90% received from Amiga Action, 87% from Amiga Format, and 93% from Amiga Computing.

The game was also released for the Sega Mega Drive, but in this case, it's more similar to Premier Manager II.