Return to Ringworld is a science-fiction point and click adventure game developed and published by Tsunami Media in 1994. 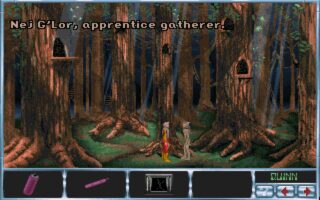 Return to Ringworld is a science-fiction point and click adventure game developed and published by Tsunami Media in 1994. The title that came out for the DOS is based on the novels of Larry Niven, first published in 1970 under the name "Ringworld."

Tsunami Media already has experience with this saga, having developed and published Ringworld: Revenge of the Patriarch in 1992-1993. Return to Ringworld is the third part of the franchise of games that, apart from the previously mentioned, features the original Ringworld RPG, from 1984.

After saving preventing the extinction of a race called puppeteers in the previous title, the main characters are now fugitives from a significant part of the universe. Therefore, Quinn, Seeker of Vengeance, and Miranda Rees decide to return to Ringworld to hide and clean their reputation. Also arriving at Ringworld is U.N. General Carson Teal, although his motives are different: he wants to discover the secrets of this planet to dominate the universe. The player embarks on an adventure that, apart from seeking evidence to prove the innocence of the protagonists, consists of stopping the plans of the villain.

This entry works in a very similar way to its predecessor. The game is totally oriented to puzzles and use of logic, with a classic inventory system and point and click style. Besides, vital importance is given to the interactions with the rest of the characters, where the player must be attentive to their dialogues and even react quickly in case one of them attacks him. On the other hand, although the gameplay remains the same, Return to Ringworld has a much wider world. Aside from a larger number of puzzles, maps, and objectives, the title now divides your time between the three main characters, allowing you to use them all.

The visuals in the game are simply wonderful. With hundreds of images occupying each section of Ringworld, they all seem to have their own identity and stand out in their own way. The hand-drawn pictures in each show vivid colors and such low saturation that the landscapes seem to be drawn with watercolor. On the other hand, the developers did not decide to mix tonalities randomly. Each map executes a theme with the same range of colors in synchrony that works perfectly. The sound was also a great success. The ambient music is composed by a futuristic tone mixed with a tribal or desert aura. Its objective is to accompany the player, but not to invade him.

The reception of the title was between mixed and positive. Despite the rare implementation of a 3D style in the game, the critics appreciated the enormous expansion of the previous release along with the fidelity of the game concerning the source material. Whether you are a fan of Larry Niven's novels or not, Return to Ringworld is an excellent graphic adventure. With its massive diversity of puzzles and scenarios, it's an easy recommendation for both lovers of this genre and those who are neophytes in this ingenious world