Shivers is a horror point and click graphic adventure. The game was produced and released by Sierra On-Line in 1995 as a PC exclusive. Although it had a foray into the world of gr... 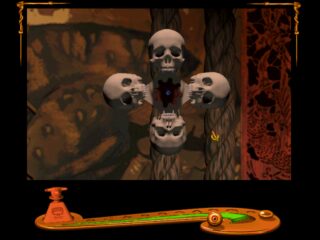 Shivers is a horror point and click graphic adventure. The game was produced and released by Sierra On-Line in 1995 as a PC exclusive.

Although it had a foray into the world of graphic adventures with Mystery House (1980), the company that would later become part of Activision had no real background in the world of terror. Therefore, based on other popular installations such as 11th hour and 7th guest, Shivers saw the light.

The premise of the game is somewhat cliché. After accepting a challenge from some friends, two teenagers are trapped in a haunted museum where two other young people and the owner of the institution disappeared. The story quickly becomes more complicated when they discover that the place is inhabited by 13 spirits called Ixupi, and the player is given the task of locking them in their respective pots. As the character advances in the plot, soon topics related to madness, the arrogance of the scientific community, aliens, and even Atlantis are revealed.

Despite being inspired by contemporaries of its time, Shivers had many characteristics that differentiated it from the rest. Firstly, there is a life bar on the screen that must be continuously monitored so that the entities do not absorb the soul of the protagonist. On the other hand, it's non-linear, so you can check the whole museum very quickly, which causes a considerable amount of backtracking. As if this wasn't enough, all the items found and stored in a small inventory of two spaces are randomly arranged, so every time the game starts from 0, it's going to be a different experience.

Being a graphic adventure, Shivers is full of puzzles. Some can be solved quickly, but this is not the norm. The overall difficulty of them varies from difficult to ridiculous, and the player must take note and be focused at all times if they want to win without a guide. It should also be noted that it inspired sagas as Resident Evil. In its third entry, Resident Evil: Nemesis (1999), there is an almost identical puzzle that involves black and white gears placed in a particular way to make them work.

The strongest points appear in the graphics: the art is conformed by 2500 Hand drawn watercolor paintings. It is impossible to define a single style, at times it can dominate a palette of intense reds and in the next click, the player find himself with a completely abstract background. This is because each room is painted exclusively by one artist from the creative group, which was made up of ten different ones. On the other hand, the art director in the game, Ron Spears, made sure that despite this survey of rooms, the museum as a whole does not feel fragmented and the rooms remain connected to each other.

Other most notable successes were found in the music and sounds. Guy Whitmore was the only one in charge of this and had the difficult task of doing everything: recording, composition, sound design, and even editing. The result of his work accompanies the images perfectly. With sounds that vary from pop, funk, and even rock, it generates the same tense atmosphere that. At times it is evoked, and from one moment to the next, it changes entirely and creates an aura of mysticism. Also, several voices were added as part of the tracks, where they can be mocking the player or begging for help. Even though one is aware that it is part of the music, with time, they blend together, and you can't help but look for the origin of the voice in the rooms.

The critics received the game positively. They criticized both negatively and positively the fact that Sierra deviated from the titles it usually produced. The most significant praise came from the side of the images and sound, considered as masterpieces.

If you are a point and click fan and want to face a real challenge, climb the hills of Mt. Pleasant, enter the doors of Professor Windlenot's Museum of the Strange and Unusual, and prepare yourself for a challenge that will go from the mathematical to the psychological. If you don't want to take such a long journey, you can download it here and play it now!

Get the full game on GOG