Shuttle: The Space Flight Simulator is a flight simulator created by Vektor Grafix and published in 1992 by Virgin Games, where you can pilot the famous Space Shuttle. 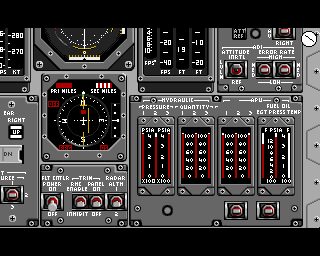 Shuttle: The Space Flight Simulator is a flight simulator created by Vektor Grafix and published in 1992 by Virgin Games, where you can pilot the famous Space Shuttle.

The game, released for the Amiga, Atari ST, and MS-DOS, succeeded in making the complexity of a real Space Shuttle into something manageable for a videogame player. It still requires reading the manual since there are 9 cockpits to manage, different cameras, several functions activated with keyboard or mouse. But with some commitment, it's possible to complete the missions and have a lot of fun doing them. The feeling of being inside a Shuttle is real. If you don't do things properly, the ship will explode.

Missions include several landing tests, the launch of the Hubble telescope, collect and repairs satellites, and more. You will have to use the time skip/time-acceleration feature because the time required for all functions is also very realistic. So, unless you want to spend several hours just for the pre-launch countdown, you better use it.

It's really a well-made simulation that almost won the title of best simulation of 1992. Not to mention that it will give you the chance to pilot the glorious first model of the Shuttle, called Enterprise, the one that never really saw the space.

It's probably not a title for all, and it's not a game without bugs, but it provides a great experience if you like flight sims or space sims. Highly recommended.