Supaplex is a puzzle game developed by Think!Ware Development and published by Digital Integration in 1991 for the Amiga and DOS. 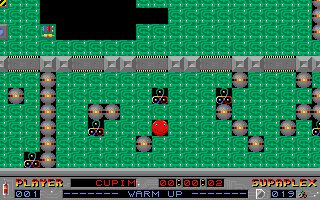 Supaplex is a puzzle game developed by Think!Ware Development and published by Digital Integration in 1991 for the Amiga and DOS.

Despite the fact the name sounds like a wrestling move, the game is intended to be a Boulder Dash clone. Instead of a little dude digging and dodging boulders, you play as Pac Man’s red cousin, eating computer innards and dodging round bombs. You have to travel around maze type levels and find all the ‘infotrons’ on each level in order to progress to the next. They kind of look like tri-color fidget spinners. Aside from the bomb hazards, other enemies and obstacles can be found inside the levels that differentiate it from Boulder Dash. It is possible to skip a triple set of levels, but the levels must otherwise be played in order.There are 111 original levels as well as a few fan-made ones.

The reviews were somewhat mixed, though mostly positive when it was released. And apparently it was incredibly popular in Israel. I love puzzle games, so this one is right up my alley. Though simple in concept, the levels are challenging and require some real thinking. Any puzzle (or Boulder Dash) fans would definitely find this one addicting and would (if you’re like me) absolutely have to finish all the levels.