Supercars International is the third game in the Supercars series and is an arcade racing game developed by Magnetic Fields and published by Hit Squad in 1996 for DOS. 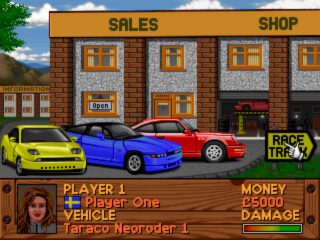 Supercars International is the third game in the Supercars series and is an arcade racing game developed by Magnetic Fields and published by Hit Squad in 1996 for DOS. The game is, at its core, a remake of Supercars II with a few enhancements.

Just pick a car and race. I’m kidding, Supercars International is so much more than that. Yes, you do get to race, but you also have weapons at your disposal to give you an edge. It is also possible to purchase armor to protect your vehicle. Purchase of these enhancements occurs between races, and this is also where you can repair your cars before the next race. The tracks will suffer some collateral damage from the race as well, showing skid marks and potholes. Supercars International has all the same tracks as the previous game. However, they have changed a bit and you can now choose your number of laps, and even run the courses backward. The tracks feature jumps and tunnels, railroad crossings where trains can hit you, and gates that open momentarily to give you a shortcut if you time it right before they close again. Trains can also be used to strategically destroy your opponents if you knock them onto the tracks. Aside from racing, you can also choose to add in the managerial mode as well. This mode adds a few new game elements and special mini-games. Choose Easy, Medium, or Hard difficulty, or simply customize your own.

This little top-down racer has earned a fair bit of praise since its release. It is still a favorite among racing gamers. Give the game a go let us know how you feel about it in the comments.