The Lords of Midnight

The Lords of Midnight is a mix of strategy and adventure games created in 1984 by Mike Singleton for the ZX Spectrum. 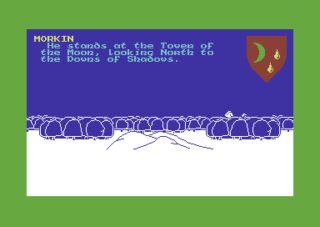 The Lords of Midnight is a mix of strategy and adventure games created in 1984 by Mike Singleton for the ZX Spectrum. In the following years, the Commodore 64 and Amstrad CPC versions were also released.

Mike Singleton created a revolutionary engine called "landscaping" for this game, used to render a 3D world from a first-person perspective. The player could move in 8 different directions, with the scene changing accordingly. Despite not being a real 3D engine, the illusion was very realistic. The game was able to show up to 32000 different views. Quite impressive, considering that we are talking about 8-bit computers in 1984. The players and the critics appreciated this solution, and the game became a huge success.

But the engine was not the only reason. Lords of Midnight was also a great combination of exploration, adventure, and strategy. The title also offers elements of wargames; you have to recruit other lords and their soldiers to defeat the evil Doomdark. There is a very high level of non-linearity, making it possible to play the game several times, constantly encountering different challenges. Even today. There are people still trying to find the best strategy to defeat Doomdark.

If you are not scared by the rudimental graphics, you should try this real milestone of the history of video games.