Tower of Babel is a 3D puzzle game created by Pete Cooke initially in 1989 for Atari ST and ported to Amiga and Acorn 32-bit in 1990. 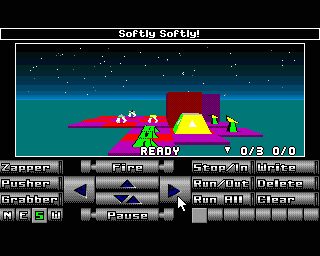 Tower of Babel is a 3D puzzle game created by Pete Cooke initially in 1989 for Atari ST and ported to Amiga and Acorn 32-bit in 1990. The game was published by Rainbird Software.

Vaguely inspired to the biblical story of the tower, in this game you control alien robots that were sent to help humans to build the tower, but in the end were betrayed by our species (we know, never trust humans!)

There are different levels (towers), each one with a different goal. Your robots have different abilities: push objects, destroy or collect/operate devices. To solve the puzzles you will have to use them in the right way. Robots can also be programmed, which adds a lot of depth to the gameplay.

The game uses 3D vector graphics with filled polygons. Pete Cooke was a famous programmer of the ZX Spectrum scene, and the quality of the code is visible in the game. Despite the Amiga/ST were not machines built for 3D games, Tower of Babel is fast and smooth.

If all of this was not enough, the game includes a map editor that you can use to create your own level. No surprise that the game received very positive reviews and that it was remade for iPhone and iPad.