Trog! is an arcade released by Midway in 1990 and converted to PC by Acclaim Software the same year. 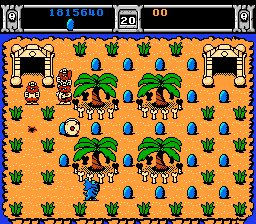 Trog! is an arcade released by Midway in 1990 and converted to PC by Acclaim Software the same year. In 1991, it was ported to the Nintendo Entertainment System.

The company that a year later would launch the Mortal Kombat to the arcade was already used to deal with the success, being responsible for the development of Pac-Man. Originally, Trog! was thought of as a simple title, where the protagonist had to locate bones to guide a dinosaur on the right path and get to the exit. After the bad reception of the critics, they decided to turn it into something much more similar to Pac-Man, so it received a second chance.

Trog!, who comes from troglodyte, tells the story of little dinosaurs called Rex, Bloop, Spike, and Gwen. The protagonists of the title are in search of colored eggs, protected by one-eyed cavemen named "trog," who seek to capture them.

The title is incorrectly known as a Pac-Man clone. Despite its apparent similarities to the classic arcade game, Trog has many of its own mechanics that give it its own identity as a video game. First of all, in this world, the dinosaur can attack enemies at any time, so the player must not only escape from them. Another method of attack is to collect the power-ups scattered around the level, with different effects that can temporarily finish off the cavemen. Besides, many of the 49 levels in the game have no walls, and the player can move around the map freely. As long as the game progresses, cavemen gradually become more intelligent and have new tools to catch the dinosaurs.

The graphic part of this title is something particular in a good sense. While the background is in 2D, the sprites seem to be rendered in 3D. But if you look closely, you will realize that it's not computer graphics, but it's claymation. The same technique used to create movies such as Chicken Run or Wallace & Gromit. The characters were really created in plasticine clay.

Both the dinosaurs and the eggs are painted blue, while the enemies use a combination of orange and yellow. Usually, in video games, aggressive behavior is encouraged through warm palettes, while cold ones are used to generating a more reflexive and strategic environment. This has an impact on the gamer, wherein action games, the red team usually has a higher percentage of wins, while the blue team does the same in strategy games. In Trog!, this applies to enemies with warm colors, who have erratic and aggressive behavior against the blue protagonists, who have to formulate strategies.

In its first release, the game risked being canceled. But once it was turned into a Pac Man variation, the title received positive reviews, highlighting some aspects such as the possibility of choosing the difficulty or playing in multiplayer competition mode. Either way, Trog! is an entertaining game, and a great choice to have a good time with a friend.