Wasted Dreams is a sci-fi isometric action-adventure created by Digital Dreams Entertainment for the Amiga and released in 1999. 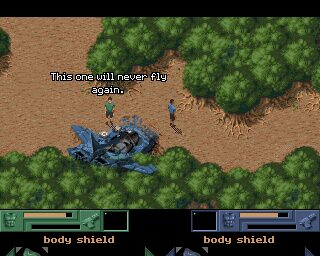 It's also, btw, the biggest Amiga game you can download from GamesNostalgia.

The adventure designed by Cvijan & Goran Cvijanović is set in a distant future, where two guys, part of an expedition to find a new planet for humanity, crash land on an alien planet. The settings and the hi-quality cinematic animations will remind you of Flashback. The difference is the view is top-down isometric and not a side view. Despite some shooting (you will have to collect a gun to defend yourself from the aliens), Wasted Dreams is mostly an adventure. You will have to find objects, talk with people and solve puzzles.

If you exclude the terrible voice acting (apparently the developers didn't have the budget for a real actor, and a guy made all the voices) the rest of the game is excellent: beautiful graphics, nice story, great intro, and -already mentioned- gorgeous animations.

You can decide to play alone, or in co-op with a friend, which is not so common for an adventure game — totally recommended.

I can operate the gun in one player with Right ALT but please does anyone know how I can get into my rucksack in this version???