This Amiga release is really unique. Where Time Stood Still is an isometric arcade adventure game developed by Denton Designs and published by Ocean Software in 1987 *exclusively* ... 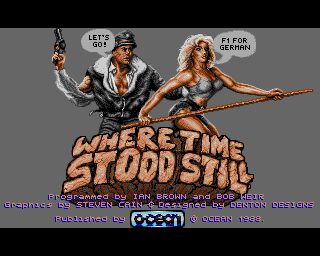 This Amiga release is really unique. Where Time Stood Still is an isometric arcade adventure game developed by Denton Designs and published by Ocean Software in 1987 *exclusively* for ZX Spectrum 128K, Atari ST and MS-DOS.

The plot is based heavily on the 1974 film "The Land That Time Forgot" and other Lost World books/movies. The passengers of a plane crash land in an uncharted area only to discover it is inhabited by dinosaurs and primitive humans. The object of the game is to keep your crew of four alive through all the dangers the area has to offer. Threats lurk around every corner and you will need to be quick on your feet to get past them. The game randomizes with each playthrough so you won’t encounter the same things in the same places. Each party member has their own strengths and weaknesses that shape the ways in which you deal with them. The crew can collect weapons and other useful items to aid in their bid for survival and will also encounter friendly natives. Do your job as leader and you will lead these hapless folks to safety. If you’re feeling a little evil, you can abandon everyone and leave them to their fate since only one party member is required to continue.

So, what's this Amiga version? As I said, Where Time Stood Still was never released for the Commodore platform, but in 2014 a developer named Galahad, with a group of other fans, decided to create an Amiga version. Starting from the Atari ST code, they were able to port the game, improving the music and adding a introduction using the comic book style adverts, not counting the bug fixes. The result is an Amiga version, developed 27 years later, that can run both on real hardware and emulators. It's an amazing job that GamesNostalgia is happy to distribute. Don't miss it!