Xtreme Racing is a kart racing videogame created by Siltunna Software exclusively for Amiga and published in 1995. 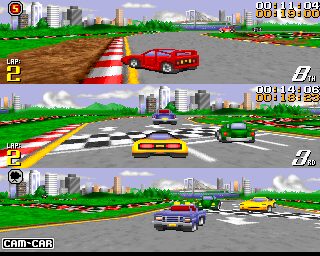 Xtreme Racing is a kart racing videogame created by Siltunna Software exclusively for Amiga and published in 1995.

The game is inspired by the famous Super Mario Kart, released for the SNES in 1992. Still, the style and settings are entirely different: much less "cartoony" and with some nasty guys called Aikaro, Bowe, Weazel, Kurzon, and Davina as pilots, instead of Mario, Yoshi, Bowser, and friends.

But apart from this, the game has everything you might ask, including 20 tracks (plus 20 additional tracks released with version 2.0), 8 different cars, several types of competitions and more. It supports 2 or 4-players split-screen mode, and 8 simultaneous players with 2 Amigas. Not mentioning the different weapons you can use against your opponents, the track editor, and more. In terms of features, it's even superior to Super Mario Kart.

But Xtreme Racing is unique also because it's one of the few Amiga games entirely in 3D texture-map graphics. The 3D engine created by the programmer Alex Amsel was terrific, even though to enjoy the hi-res 1x1 graphics, an accelerator was required. On an unexpanded A1200, you could have decent fps only with 2x2 resolution. Check the screenshots below to see the difference. Luckily, GamesNostalgia prepared for you a very special package, with an emulated A1200 + Blizzard 1260 accelerator, with 68060 CPU. This way you can play at the maximum speed and quality. Enjoy!

Note: to use 1x1 resolution, hit "Esc" and go right until you see "Screen Option 2".